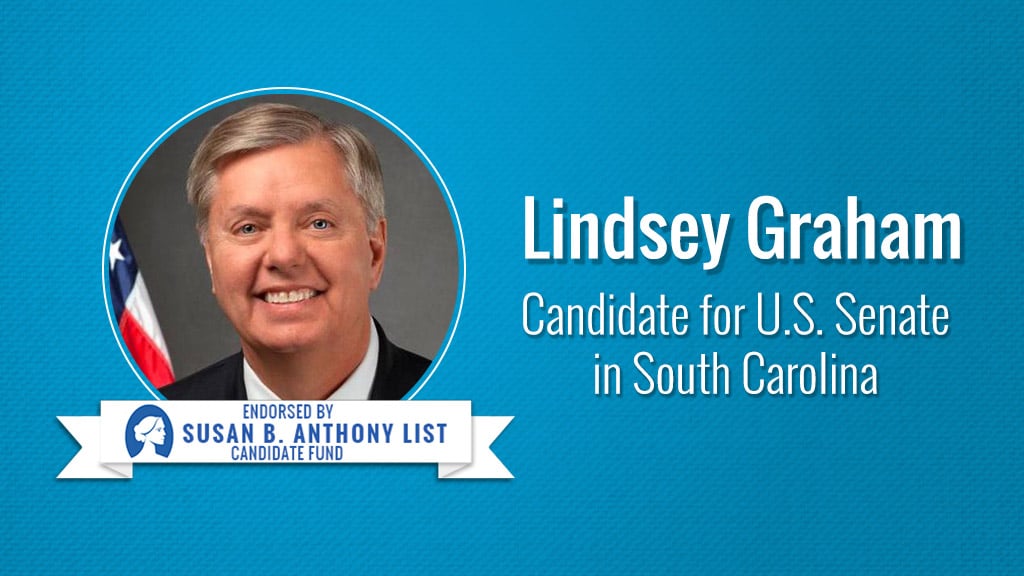 “Senator Lindsey Graham is a longtime ally of SBA List and a pro-life hero of exceptional caliber,” said SBA List President Marjorie Dannenfelser. “Graham is the Senate’s leading champion of ‘Micah’s Law,’ compassionate legislation to protect unborn children from late-term abortion after five months of pregnancy, when science shows they can feel pain. From the start he embraced this role boldly and wholeheartedly, and this popular bill has gained momentum ever since, passing in 21 states.

“Today Sen. Graham is also leading the charge to protect babies born alive in failed abortions, in the face of unprecedented Democratic obstruction. As chairman of the influential Judiciary Committee, he has been a fearless advocate for President Trump’s nominees, notably Supreme Court Justice Brett Kavanaugh, overseeing the confirmation of nearly 200 federal judges. For all he has done to advance the cause of life, Sen. Graham has earned the highest grade of ‘A’ on our Pro-life Scorecard. We are proud to endorse him and greatly look forward to his re-election.”

“Senator Lindsey Graham is a pro-life champion in Washington, DC and he represents the deeply held belief of South Carolinians that all life is precious and worth protecting. As a proud member of Susan B. Anthony List’s National Pro-Life Women’s Caucus, I echo their support for Senator Graham’s re-election. We need to keep him in Washington so he can continue to lead the charge for Life in our great nation.”

Lindsey Graham was first elected to the U.S. Senate in 2002 after serving four terms in the U.S. House of Representatives. Since 2019 he has served as chairman of the Senate Judiciary Committee. He is the primary sponsor of the Pain-Capable Unborn Child Protection Act (known as “Micah’s Law” in honor of Micah Pickering), which would protect unborn children from late-term abortion after five months, more than halfway through pregnancy, a point by which science shows they can feel pain. He is a co-sponsor of the Born-Alive Abortion Survivors Protection Act. As chairman he has led hearings on both bills, as well as leading the confirmation of nearly 200 federal judges.

The first in his family to attend college, Graham received his law degree from the University of South Carolina. Upon graduating, he was commissioned as an officer with the Judge Advocate General’s Corps in the U.S. Air Force and entered active duty. He later joined the Air Force Reserve. In 2014 he received a Bronze Star and in 2015 retired with the rank of colonel after more than three decades of distinguished military service. A native of South Carolina, he lives in Seneca and is a member of Corinth Baptist Church.