Dannenfelser: “Senator Manchin’s excuses for his flip-flops are unacceptable”

“Joe Manchin claims to be pro-life, yet he rationalizes sending more than half a billion dollars a year in taxpayer funding to the nation’s largest abortion business, Planned Parenthood,” said SBA List President Marjorie Dannenfelser. “Research shows Planned Parenthood controls more than 35 percent of the national market for abortions and is not a significant provider of medical care in the United States. Furthermore, West Virginia women and families are served by 301 community health center sites offering comprehensive primary care. Funding should be redirected to these centers, which are more comprehensive and accessible than the state’s one Planned Parenthood facility that Manchin insists on propping up. Planned Parenthood clearly does not need or deserve tax dollars.

“Senator Manchin’s excuses for his flip-flops are unacceptable and prove that he is out of step with his pro-life constituents. SBA List’s field team will be active in West Virginia through Election Day working to educate voters about Manchin’s record, and he will be held accountable at the ballot box.” 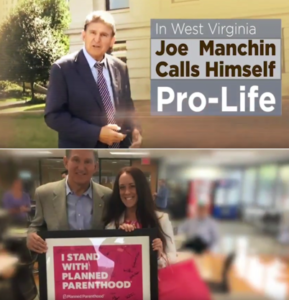 Sen. Manchin has flip-flopped on the issue of taxpayer funding of abortion:

SBA List’s field team of more than 500 pro-life canvassers recently expanded to the Mountain state and is visiting voters’ homes to educate them on Sen. Manchin’s record and the importance of voting pro-life. The ground activity is part of an historic effort to visit more than two million homes across the battleground states of Indiana, Ohio, Florida, Missouri, West Virginia, North Dakota, and Montana ahead of Election Day 2018. The SBA List team will hold press conferences across West Virginia this week urging Manchin to respect the will of West Virginians by supporting the nomination of Judge Brett Kavanaugh to the Supreme Court.

Last week SBA List announced a second round of TV and radio ads (pictured right) in West Virginia as part of a $1.6 million issue advocacy campaign to educate West Virginia voters about Manchin’s support for taxpayer funding for Planned Parenthood.

Susan B. Anthony List and its partner super PAC, Women Speak Out spent more than $18 million in the 2016 election cycle, visiting more than 1.1 million homes in battleground states to defeat Hillary Clinton and maintain a pro-life Senate. SBA List is dedicated to pursuing policies and electing candidates who will reduce and ultimately end abortion. To that end, SBA List emphasizes the education, promotion, mobilization, and election of pro-life women. SBA List is a network of more than 630,000 pro-life Americans nationwide.