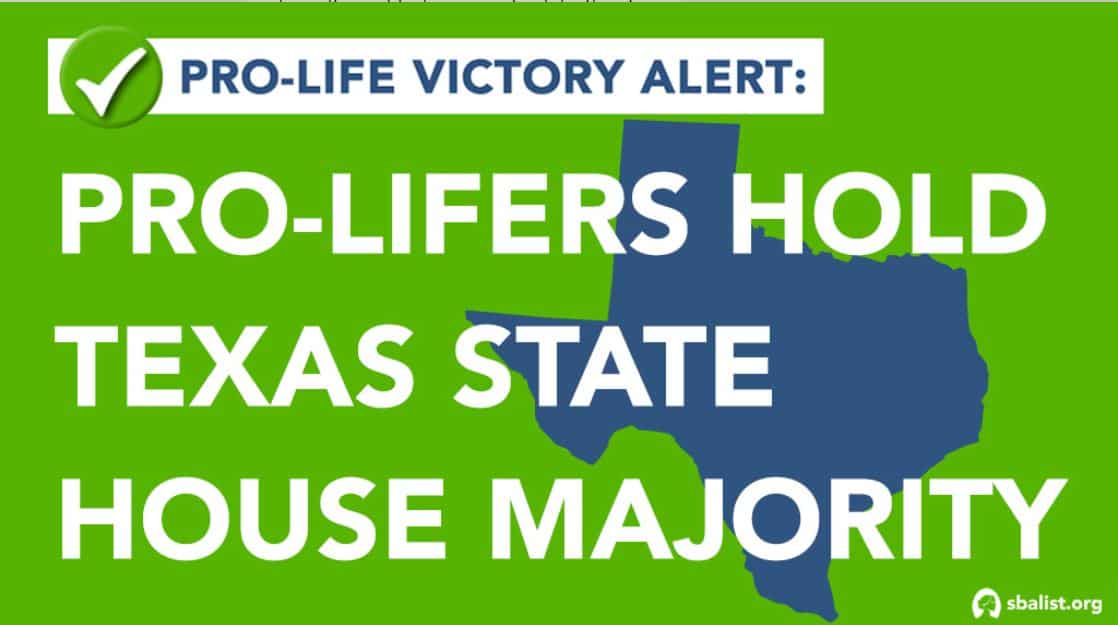 Washington, D.C. – Today the national pro-life group Susan B. Anthony List and its partners, Women Speak Out PAC and Pro-Life America General Purpose Committee celebrate victory with wins in 18 of 23 Texas House races in which they engaged to defeat pro-abortion extremists and preserve a pro-life majority in the Texas Legislature.

The Lone Star State efforts were part of SBA List and its partners’ overall $52 million budget for the 2020 cycle and campaign, and included targeted voter contact mail, phone calls, texts, and door-to-door canvassing.

“Life was a decisive issue in Texas last night, and our dedicated pro-life field team has been working hard since June of this year to ensure that no pro-life vote was left out in the field,” said Jessica Colón, Women Speak Out PAC Texas State Director. “Texas rejects abortion extremism, and we are proud of our efforts to protect the unborn.”

“Life is winning in Texas and nationwide,” said Marjorie Dannenfelser, president of Susan B. Anthony List. “We are proud of our teams’ efforts to protect Texas’ pro-life majority – thwarting pro-abortion extremists’ plans to infiltrate the Texas legislature and employ political redistricting. Our Texas team also succeeded in ensuring authentic pro-life, pro-woman leaders represent Texas in Congress. The defeat of a pro-abortion radical like Wendy Davis – and more than a dozen like her at the state level – as well as the election of a pro-life champion in Beth Van Duyne solidify Texas as a stronghold in the fight to defend unborn children.”

Pro-Life America is a Texas general purpose committee that works to get out the vote to elect pro-life lawmakers who pass pro-life laws & end abortion.

Paid for by Women Speak Out PAC and Pro-Life America General Purpose Committee.  Not authorized by any candidate or candidate’s committee.