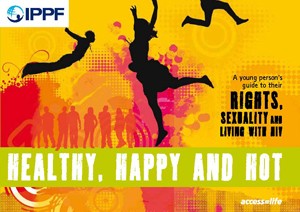 Planned Parenthood made their presence felt at the annual United Nations Commission on the Status of Women (CSW) last week, according C-FAM, via their new brochure: “Healthy, Happy and Hot”.

Naturally, the brochure goes on to encourage getting support from family planning clinics to allow for access to “a safe abortion procedure.”  But the most outrageous statement from the brochure is their declaration against the laws that say people who have HIV must inform their sexual partners about their HIV positive status before sex. These laws “violate the rights of people living with HIV by forcing them to disclose” according to the brochure. The rights of the sexual partner to know the risk they are taking is completely ignored.
The fact that the World Association of Girl Guides and Girl Scouts support the distribution of a Planned Parenthood brochure is not surprising as they also sent a representative to rally with other young people at the CSW in support of “sexual and reproductive rights” including the right that “Accessible, affordable and safe abortions should be made part of the minimum packages of sexual and reproductive health services.”

The CSW delved further into the realm of sexual and reproductive “health” in a UN Joint Statement put out by the UN Population Fund, UN Educational, Scientific and Cultural Organization (UNESCO), UN Children’s Fund and the World Health Organization. Calling themselves the “UN Adolescent Girls Task Force” they put forth the priority of providing “life skills-based sexuality education, HIV prevention, and sexual and reproductive health.”

The UN’s relationship with Planned Parenthood and support of abortion are all a part of “Planned Parenthood’s insidious plan to work with UN agencies and girls’ organizations in order to profit from encouraging kids to be sexually active”, Wendy Wright, President of Concerned Women of America, informed C-FAM.

With even the World Association of Girl Guides and Girl Scouts, usually known for cookies and hiking, promoting abortion as a right, the situation is insidious indeed.